From the Archives of Dave's Trains, Inc.
www.davestrains.com

The early Stalin-era train sets produced by the Soviet Union in the 1950's included a 75-watt transformer which was designed to operate on their standard household current, which at that time was 127 volts. However, during the 1950's and 1960's, the Soviets gradually converted to 220 volts and eventually, a 220-volt transformer was produced for the later Khrushchev-era sets. An owner of an earlier set with a 127-volt transformer who was living in an area where the household current was 220 volts would need a voltage reducing device to operate the train. The apparatus was probably produced for more important USSR household needs but for safety reasons had to be made available to run model trains, including those that were already on the market.

The August 1964 instruction manual addresses the 220-volt issue on the last page of the text plus a translation of one of the instruction manuals reveals a direct reference to such a unit. That translation was edited by N. I. Kobyakov and Z. N. Adindinova and reads in part: "Use only 127 volts for speed regulator. A factory provided 220-127v step-down transformer must be used . . . if using 220v power." 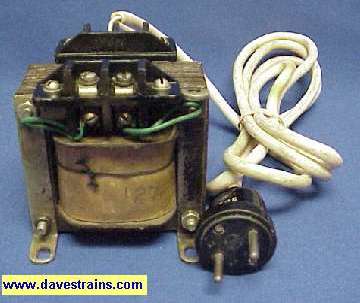 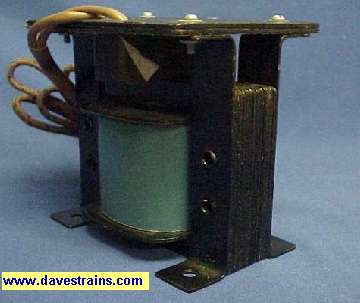 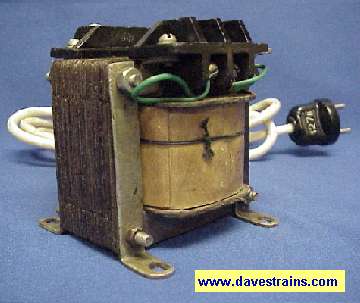 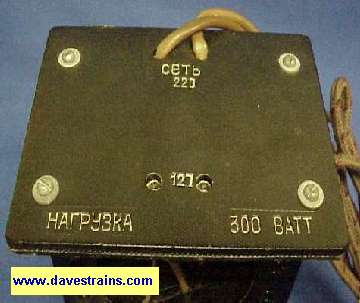 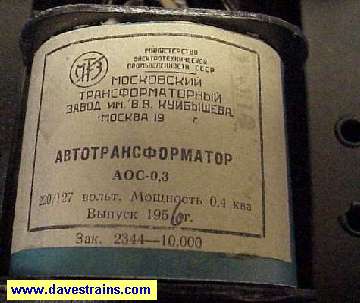 ABOVE LEFT: Data on Deluxe unit; ABOVE RIGHT: "220v" Handwritten on Generic unit

The following is a description of one voltage reducer that surfaced with a Soviet train set:
This voltage reducer is mostly black painted metal and while it has a strange and industrial look about it, the unit appears to be a professional-quality product. The internal elements -- including metal plates which protrude on the sides -- are clearly visible as there is no cover or case. The voltage reducer does have blue paper covering what would appear to be a coil and covering one side of the coil is a white label with manufacturing and technical data. The bottom has four brackets to allow the device to stand upright. (The brackets can also be used to mount it to a wall or bench.)

The top is made of black plastic and contains additional data written in white. There are two holes in the top with "127" between them. This is the receptacle for the plug from the transformer. The line cord is covered in cloth and the electrical plug is a European-style 2-prong type. The rectangular unit measures 4 7/8 inches across, 3 3/4 inches deep and 5 inches high and it weighs 6 1/2 pounds.

The following is a description of another voltage reducer that surfaced with a Soviet train set:
This voltage reducer is mostly silver plated metal with Bakelite terminal blocks and it has a very unfinished and "dangerous" look about it -- as if only an experienced electrician should even think about using it. The internal elements -- including metal plates which surround what looks to be a coil -- are clearly visible as there is no cover or case. The voltage reducer does have brown paper covering the coil -- "220v" is handwritten on one side and "127v" is handwritten on the other side. There is no preprinted label or any identification whatsoever on the unit and therefore no manufacturing or technical data is present. The top has terminal screws while the bottom has four brackets to allow the device to stand upright. (The brackets can also be used to mount it to a wall or bench.)

This particular voltage reducer came with a white (homemade-looking) line cord with a "127v" plug. That could mean that the original plug was lost or more likely, that one was not furnished with the unit. That is plausible because the customer may have been expected to remove the plug from the 127-volt appliance and connect the bare wire ends to the terminal lugs of the voltage reducer since this model did not come with a built-in receptacle. (That may also explain why a handful of Soviet transformers have surfaced without an electrical plug.) This mostly rectangular-looking unit measures 3 3/8 inches across, 3 1/4 inches deep and 3 3/4 inches high and it weighs 4 pounds.

The voltage reducers were probably introduced at the same time that the Soviets first started to convert household current to 220 volts. They were most likely produced as universal, "off-the-shelf" electrical devices to be used for many applications and it is conceivable that they may still be available today. In connection with the trains, they were probably advertised through 1969 -- the last year of production for the trains. (either included with the sets, which seems logical, or at least in the form of a warning to the customer to "go get one"). Two of these devices have been examined and they represent two different designs. It is likely that there are many different ones.

This page is an information document only; nothing on this web page is being offered for sale. This page and all of the other pages from Our Soviet Archives were developed to assist you in understanding the components of the train sets produced in the Soviet Union during the 1950's and 1960's. These sets are known today as "Stalin-era" sets and "Khrushchev-era" sets. We have used pictures from our old files and personal collection to construct this area of our website. If you are interested in buying something, please view our inventory listings to see what we currently have for sale.

This web page was last updated on September 9, 2005. If you have suggestions for improving this page or if you see any errors, please contact us.

Return to the Main Menu of Dave's Trains, Inc.