From the Archives of Dave's Trains, Inc.
www.davestrains.com

Every Stalin-era and Khrushchev-era train set produced by the Soviet Union in the 1950's and 1960's included a 75-watt transformer -- also called a "speed regulator" or "power supply." The design of this piece was pilfered from Jefferson Electric (who also made transformers for American Flyer) and it represents yet another example of stealing shamelessly.

The faceplate and rear data plate are painted black with raised letters in brass. A red lens covers a short-circuit indicator bulb and a black button is used to reset the unit to clear the short circuit. There are three binding posts: one for fixed voltage, one for variable voltage and one for ground. The output is 5 to 13 volts. The line cord is black and the electrical plug is a European-style 2-prong type. The cases were painted various colors, including olive green, red, "brownish red" and maroon. The transformer is round, measures 5 ˝ inches across and 4 ľ inches high and weighs 5 pounds.

ABOVE: Early 127-volt transformer: data plate has "MEP" and "CCCP" 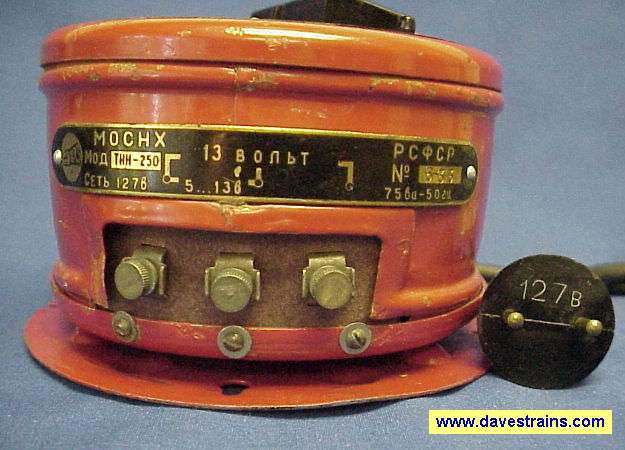 ABOVE: Later 127-volt transformer: data plate has "MOCHX" and "PCFCP" 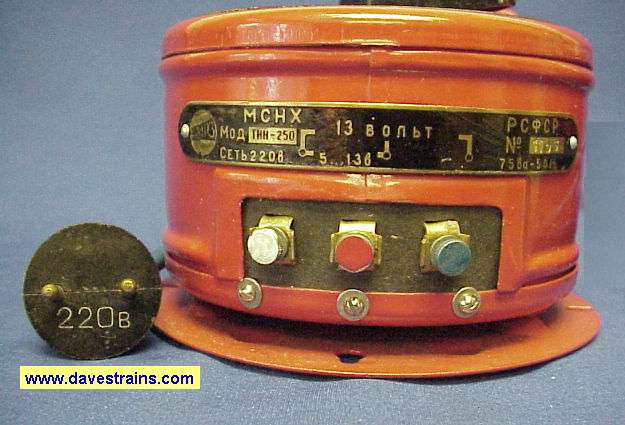 ABOVE: A 220-volt transformer: data plate has "MCHX" and "PCFCP"

The basic design of the Soviet transformer remained unchanged throughout its life. The shape and top plate of a 127-volt transformer look the same as those of a 220-volt transformer. The differences are in the plug -- which will have either "127v" or "220v" on it -- and the information shown on the data plate. Most of the information on the data plates are the same. However where the early 127-volt transformer has these abbreviations: "127v" -- "M E P" (Ministry of Electro-technical Industries) and "C C C P" (Union of Soviet Socialist Republics), the later 127-volt transformer has these abbreviations: "127v" -- "M O C H X" (Moscow City Council of National Economy) and "P C F C P" (Russian Soviet Federal Socialist Republic) on it. (This item may represent a transition piece -- possibly representing the fact that a different government organization had responsibility for overseeing the production of these items.)

The 220-volt transformer's data plate has "220v" and also the same "P C F C P" (Russian Soviet Federal Socialist Republic) on it but curiously the abbreviation for the Moscow City Council of National Economy was shortened to "M C H X" -- the reason is unclear.

Other than input voltage, the only other variations will be due to the color of the bases. A serial number is stamped on the data plate and may help in determining year of production. The original box -- which is very rare -- is made of soft brown cardboard which is held together by staples. The box opens from the top and is extremely flimsy, especially given the heavy item it was intended to protect! Naturally, very few have survived. The box is square and measures 6 3/4 inches wide by 6 3/4 inches deep by 5 1/4 inches high. Neither the box nor the lid have any printing or identification marks.

This page is an information document only; nothing on this web page is being offered for sale. This page and all of the other pages from Our Soviet Archives were developed to assist you in understanding the components of the train sets produced in the Soviet Union during the 1950's and 1960's. These sets are known today as "Stalin-era" sets and "Khrushchev-era" sets. We have used pictures from our old files and personal collection to construct this area of our website. If you are interested in buying something, please view our inventory listings to see what we currently have for sale.

This web page was last updated on September 11, 2005. If you have suggestions for improving this page or if you see any errors, please contact us.

Return to the Main Menu of Dave's Trains, Inc.